This vlog introduces what to eat at Shonan & Enoshima. My family and I took the short trip to Kanagawa prefecture, which locates next to Tokyo. We stayed at the beautiful and cozy house found on Airbnb and discovered the area. Please enjoy watching this vlog and check what we had there!
For more information about each foods etc, please read the article down below!

Shonan (湘南) is located south-west Kanagawa prefecture which is about 1 hour away from central Tokyo. 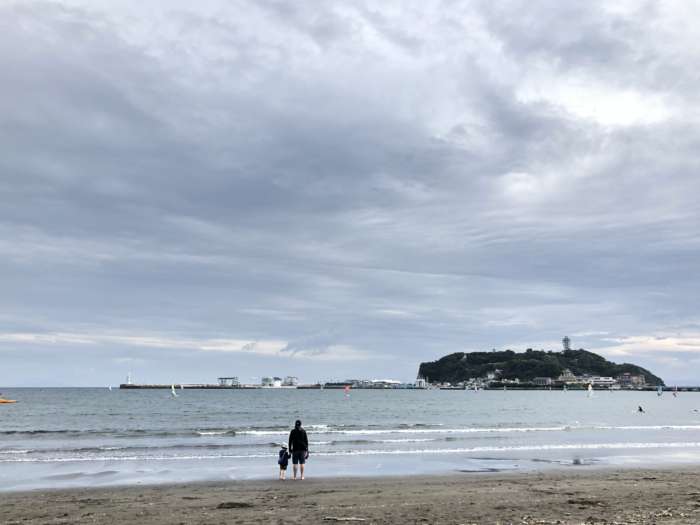 Shonan（湘南）is the name of a region along the coast of Sagami Bay in Kanagawa Prefecture, central Japan.

Centered on Enoshima, an island about 50 kilometers southwest of Tokyo, the Shōnan region stretches from Ōiso in the west to Hayama in the east, including Hiratsuka, Chigasaki, Fujisawa, and Kamakura. There are numbers of beaches on its coast line. So, the area is mostly known for marine activities such as surfing, SUP, fishing, etc.

Many locals play marine sports all year around. During summer, the area gets really busy as all ocean lovers gather to enjoy their seaside life. There are numbers of shops offer rental facilities if you wish to try. Many beach shacks are lined on the beach where visitors can enjoy food, drinks and music. If you would like to chill out, numbers of stylish and fashionable cafes, restaurants and shops are there for you!

Enoshima (江の島) is a pleasantly touristy island connected to Kanagawa prefecture by a 600 meter long bridge. There are many famous sightseeing spots on this island including Enoshima shrine, New-Enoshima Aquarium, Botanical gardens, Observation tower and caves; there are many visitors throughout the year.

Visitors can see Enoshima shrine when they walk up the hill. It is where Rabenten, one of three Bentens (goddess of arts and wisdom) is enshrined. There is also the Samuel Cocking Garden, which has Japanese and Western styles, and an observation deck around Enoshima shrine. The observation deck is the best spot to see the sunset from, and if the weather is good, there is a chance to see Mt. Fuji from that location.

3 Things to do at Shonan & Enoshima

1. Hop on the Enoden

Enoden (Enoshima Dentetsu) is a local railway which runs between Fujisawa Station and Kamakura Station passing through the neighbourhood and by the coastline.

The Enoden line is a very popular railway among Japanese people and also tourists.

It’s a small local train but now popular as a tourist attraction for the scenic train route. It’s highly recommended for sightseeing in Kamakura and Enoshima area as you can hop on and off when you buy an economical one day pass called “Noriori-kun”.

2. Visit the Enoshima shrine, feel the nature while walking back to the entrance of enoshima Island 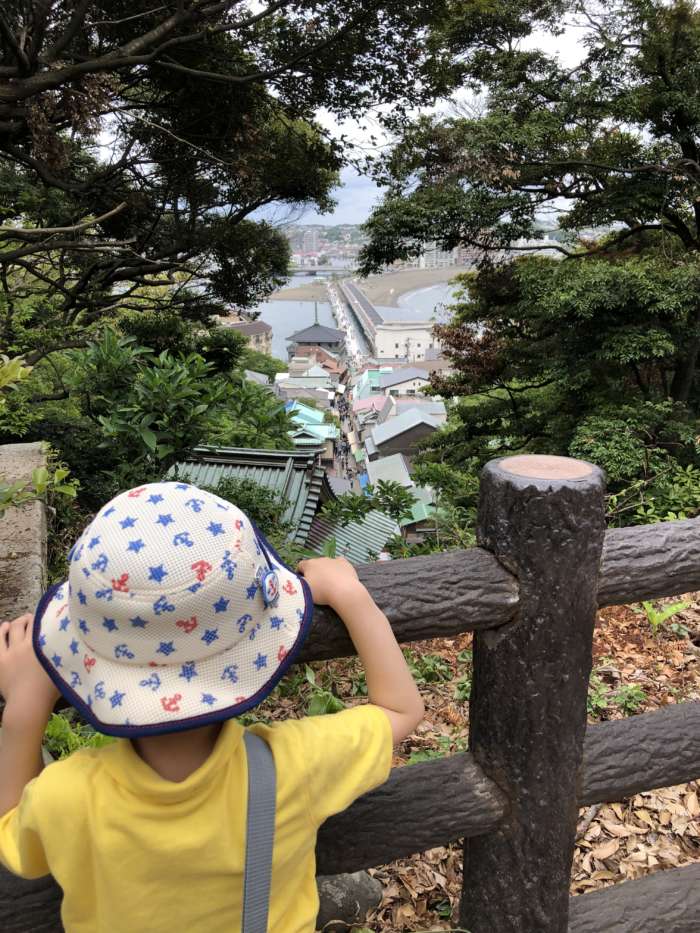 Enoshima Shrine is one of the three major shrines in Japan honoring Benzaiten, the goddess of music, eloquence, wealth, and wisdom. There are many stairs leading up to the shrine, but if you can’t or don’t want to take that route, you can use the Enoshima ESCAR, a long escalator that takes you up and down the island. At the shrine there is a ginkgo tree called the Musubi no Ki that has 2 trunks but 1 root. It’s believed to have the power to bring you a good relationship. You might find a good match just like this tree if you write your prayer on a pink musubi ema, a wooden plaque for match-making prayers.

3. Play with cats in Enoshima Island

It is said that there are over 1,000 cats living in Enoshima Island.  You can meet cats in various places such as Enoshima Shrine and Shoutenjima Park.  They are more likely to be found on cooler days and in early evenings. Please note that feeding cats is prohibited in Enoshima. However, there are fund-raising boxes around the island to help support the locals care for street cats. 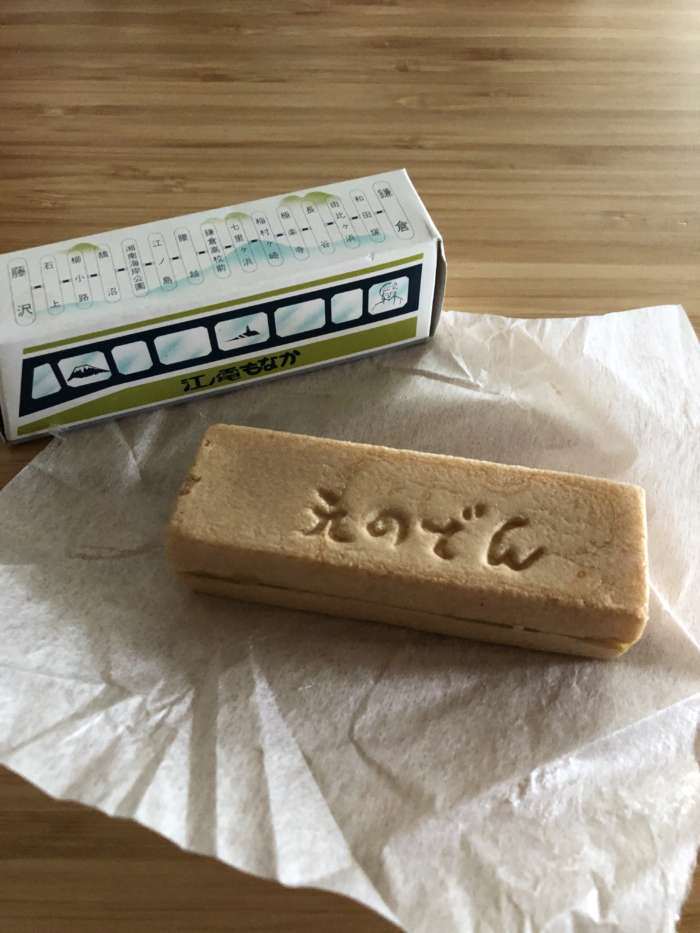 The packaging is also very unique! Since my son Kengo like trains/railways and Monaka. So, Enoden Monaka is definitely his favorite sweets (same as Toden Monaka!).

– Handmade Gelato at The Market SE1

Homemeade ice cream made of non-homo pasteurized milk “Mountain Dairy” and gelato using fresh seasonal fruits and vegetables. The owner went to England after gaining experience at a Japanese restaurant. He has experience cooking at HONDA’s F1 racer chef and Nobu London.

On this day, I ordered milk gelato and strawberry gelato, which allow you to fully enjoy the taste of milk. Milk gelato had a fine and smooth mouthfeel. Strawberry one had a refreshing sour flavor.

Tako senbei is a rice cracker with octopus. This shop is always crowded with customers on the road towards Enoshima Shrine. They press an entire octopus into a thin senbei sheet under 185°C heat! You can buy tako senbei as well as jellyfish senbei!

– Various seafood at shops near the entrance of Enoshima

Near the entrance of Enoshima Island, there are many shops and restaurants that sell various fresh seafoods like octopus, squid, jelly fish, turban shell and so on.

I personally like shell fish so I tried the grilled turban shell. It tasted like a sea and had a little of bitterness. I loved it! 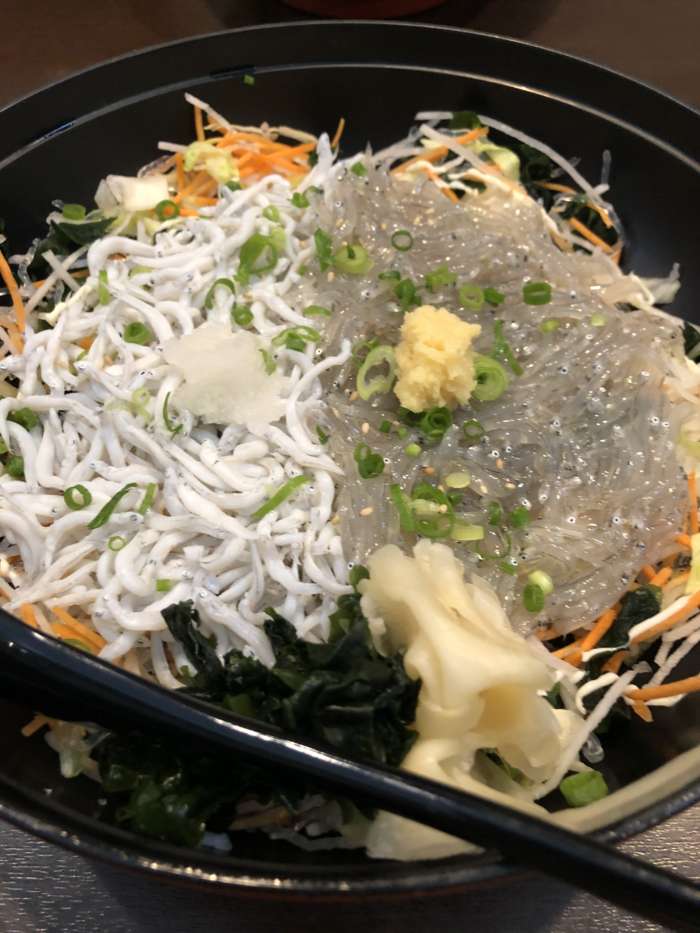 Shirasu, whitebait, is a famous delicacy in Enoshima. Shirasu is the general term for young, white fish that measure only about a centimeter. Fresh shirasu is slightly bitter, but it’s full of umami flavour and goes well with sake. Boiled shirasu is also delicious. Shirasu is most popularly served raw or cooked over white rice as donburi which means “over the rice”.

They are caught in large numbers in Sagami Bay around Enoshima. Shirasu fishing in Enoshima starts in mid-March and continues until December. Please note that they don’t serve them when it’s poor catch.