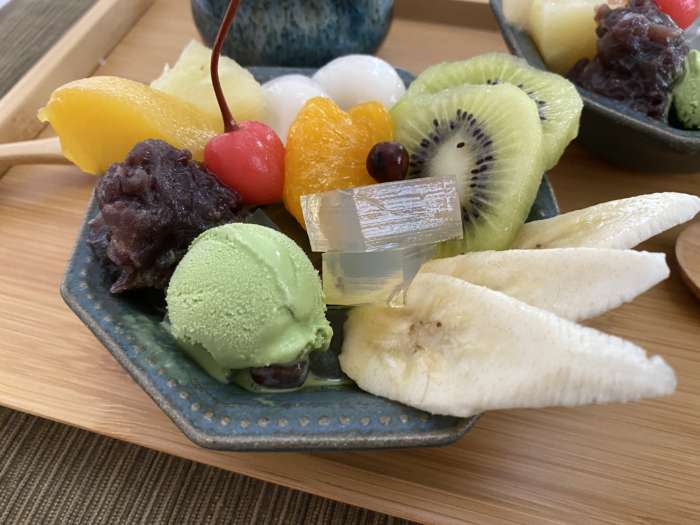 Anmitsu (あんみつ) is considered as a summer dessert but we can buy it all year around here in Japan. This Japanese style parfait is made of small cubes of agar agar jelly, red bean paste called anko, mochi, various fruits, ice cream (either vanilla or matcha flavor) and boiled red beans. It’s usually served with brown sugar syrup called Kuromitsu that you pour over the Anmitsu before enjoying this sweets. 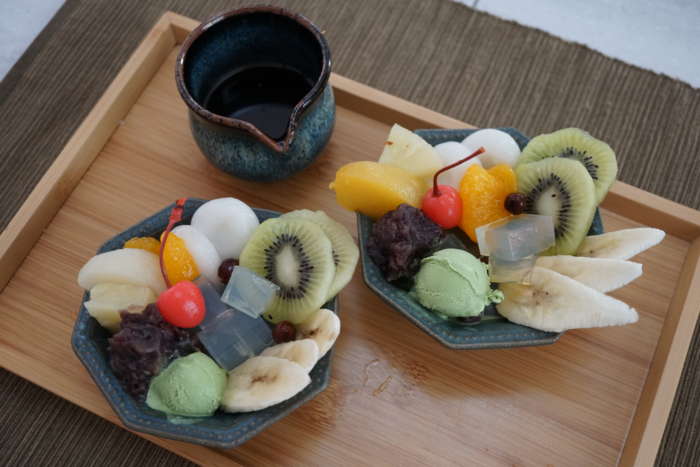 What exactly in the Anmitsu

Agar agar jelly is a transparent color jelly made from tengusa, a Red Sea alga. It has no calories and no taste; and takes on the flavor of whatever it is mixed with; it solidifies at room temperature, making it simple to work with.

Sweet bean paste often made from Azuki beans, which is an essential ingredient in Japanese sweets. Red bean paste is either smooth (Koshian) or chunky/grainy (Tsubuan). It’s key ingredients of Anmistu because its name comes from the abbreviation of Anko.
*It can be a perfect sweets for vegetarians and vegans.

A taffy made from sticky rice that has been steamed and pounded. It’s easy to use glutinous rice flour to make mochi. There are two kinds of rice flour; Dango-ko (or Joshinko) and Shiratama-ko. Dango-ko is made from non-sticky rice.
*In my recipe, I normally use Shiratama-ko, which doesn’t require a steaming process.

Another important topping of Anmitsu for summer. Normally, either vanilla or Matcha ice cream. Somehow no sherbets for Anmitsu.
*I didn’t use vanilla ice cream this time because to avoid conflict in color from Mochi.

This is another key ingredients of Anmitsu because its name comes from the abbreviation of Kuromitsu. It’s called brown sugar syrup but is almost black in color.

A few boiled peas are normally topped with Anmitsu. Even in Japan, it’s hard to find those specific peas at the local supermarket. *I used the those peas from a canned Mitsumame.

You can use any fresh fruits or canned fruits to create your Anmitsu. 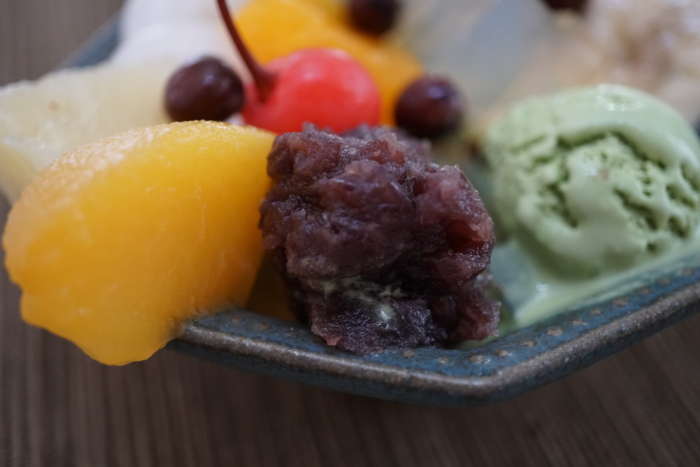 Anmitsu is a traditional Japanese sweet. Anmitsu may be avoided by young Japanese people since there are various imported sweets everywhere. However, my family and I love Japanese sweets in general so we eat Anmitsu all year around. I always eat ice cream first, but please enjoy in any order you like.

The sweetness and sourness are perfectly harmonized thanks to the brown sugar syrup. Ice cream and Mochi are always perfect match.

You may be able to find canned Anmitsu at your local supermarkets, but please try handmade Anmitsu. It’s always the BEST!

Many variation exist in Anmitsu. It started as mitsumame (みつ豆) for children in Edo period. Nowadays, you can see various fruits in the mitsumame at Japanese cafes or canned mitsumame product. But here are the basic understanding for the world of Anmitsu. 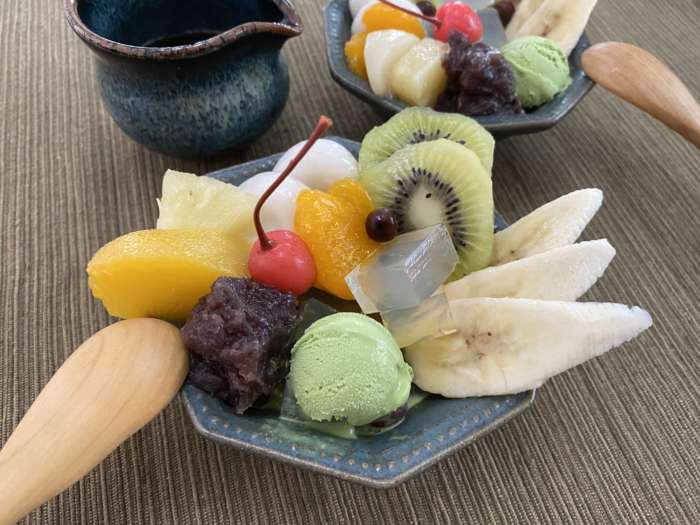 Watch How To Make Anmitsu

Editor’s Note: This post was originally published on October 21st, 2020. 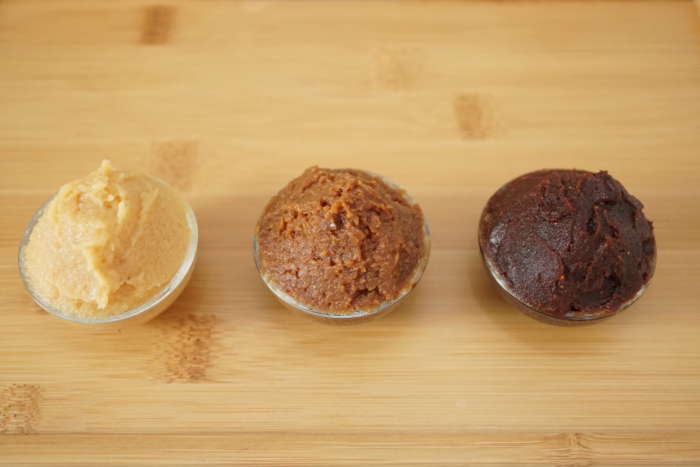 Miso (味噌) is a fermented paste, which is made from soybeans and sea salt combined with koji (麹, a type of mold starter). The koji in miso can be made from any grains like brown or white rice, barley or soy beans. 80% of miso sold is kome-koji(米麹, rice koji) based.

Miso is one of the key ingredients in Japanese cuisine. Personally, I like miso because miso is a versatile seasoning and also a fermented food. I make my own miso every year at home. Once it sets, the fermentation starts and can take from 3 months to 3 years! I usually wait for 8 months. The longer the fermentation process, the darker and the more intense the flavor of miso becomes.

There are mainly 9 types of Miso in Japan. To make it easy and simple, I introduce three colors and three base ingredients of Miso. 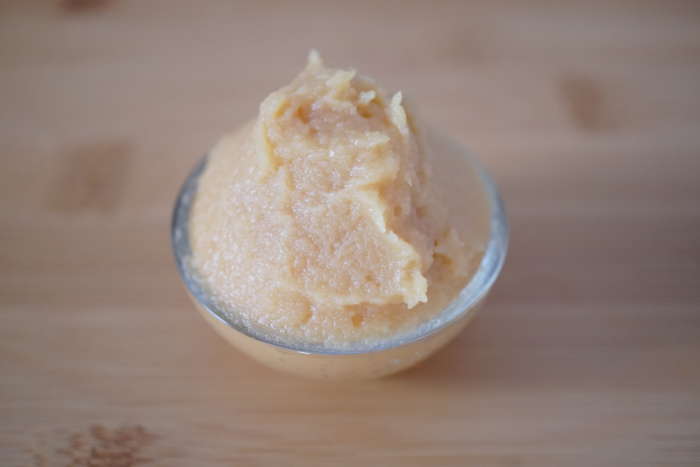 Shiro Miso is light yellow, smooth paste made from soybeans and rice koji. It generally tastes mild and light in flavor and contains the most carbohydrates of all miso and therefore it tastes the sweetest. 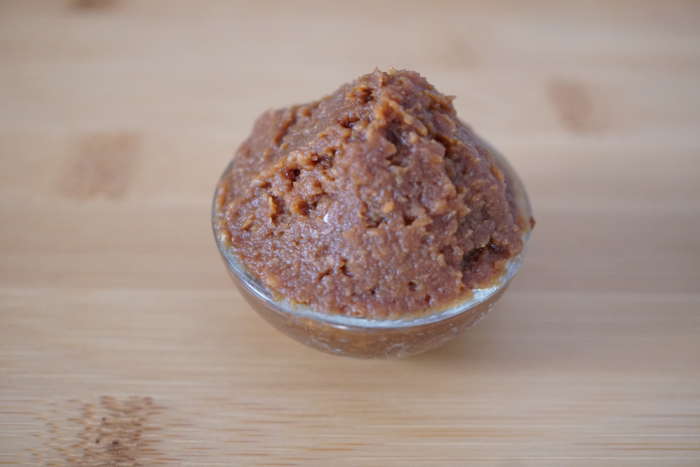 It is a combination of Red Miso and White Miso. This is the traditional miso to make miso soup everyday at home. 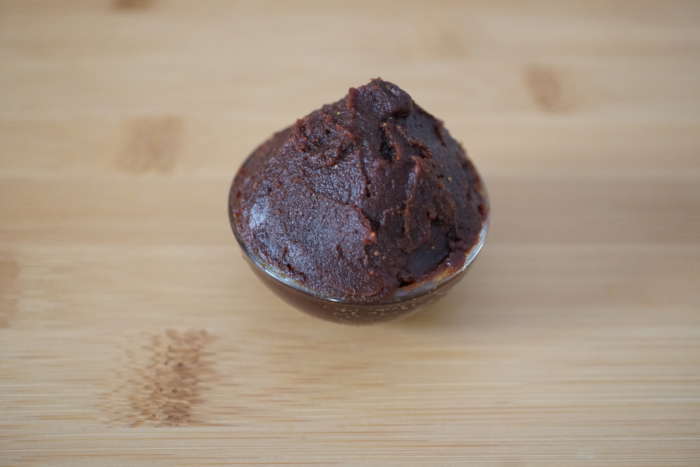 The longer fermentation period (around 1 to 3 years) of White Miso produces Red Miso. It gets darker color and deep aromatic flavor and salty miso. Red Miso contains the highest levels of protein of all types of miso.

Miso by Three Base Ingredients

2. Barley Miso (Mugi Miso 麦味噌) : Miso made from soybeans, salt, and barley koji (麦麹).  It has a very dark color and quite salty but very rich taste. In addition, it has grainy and malty in taste. Fermentation period is one to three years. Barley miso is the most common in Kyushu region, southern parts of Japan. 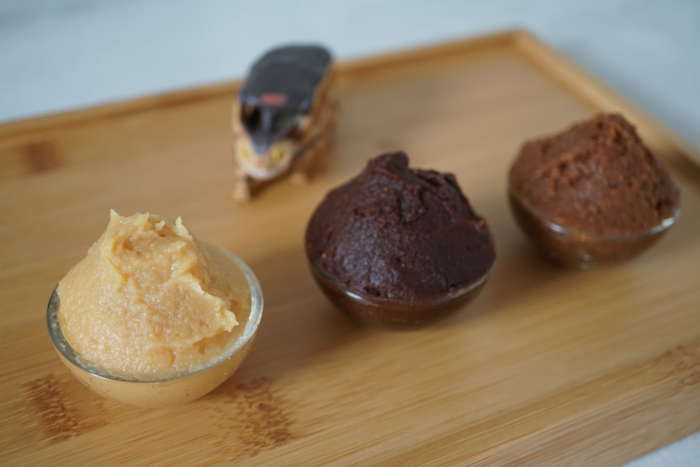 There is no appropriate substitute for miso. However, vegimite or marmite would be the similar.

Miso should be kept in the fridge to stop the fermentation process and preserve its freshness.
Miso doesn’t freeze so you can also store it in the freezer and use whenever you need right away.
You can keep the miso up to one year once after open the package. 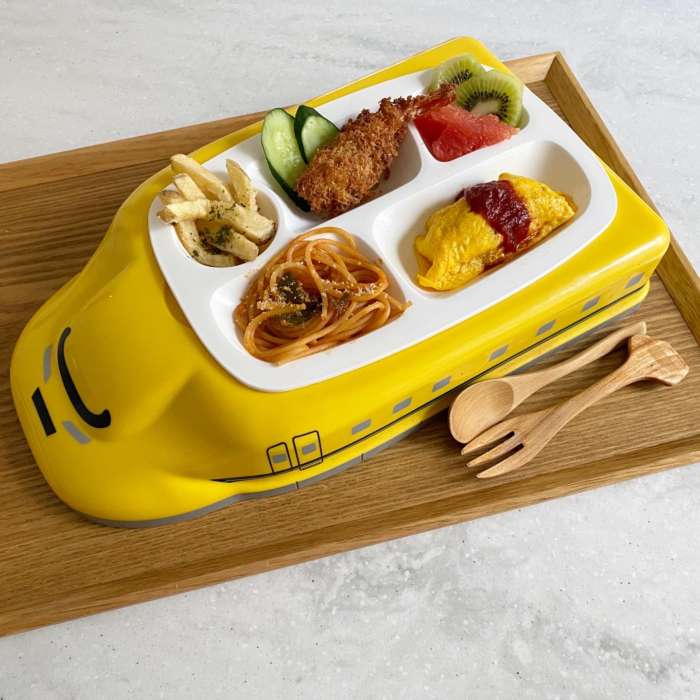 In Japan, there is a kids meal called Okosama lunch. In this kids meal, there are several Yoshoku (Western influenced Japanese food) dishes such as curry rice , hamburg/hamburger , Neapolitan pasta , fried shrimp and omelette aside with salad, fruits and sweets! Everything that kids love are decorated in one plate! ❤️ Some restaurant even gives toys and stationeries, too!!! 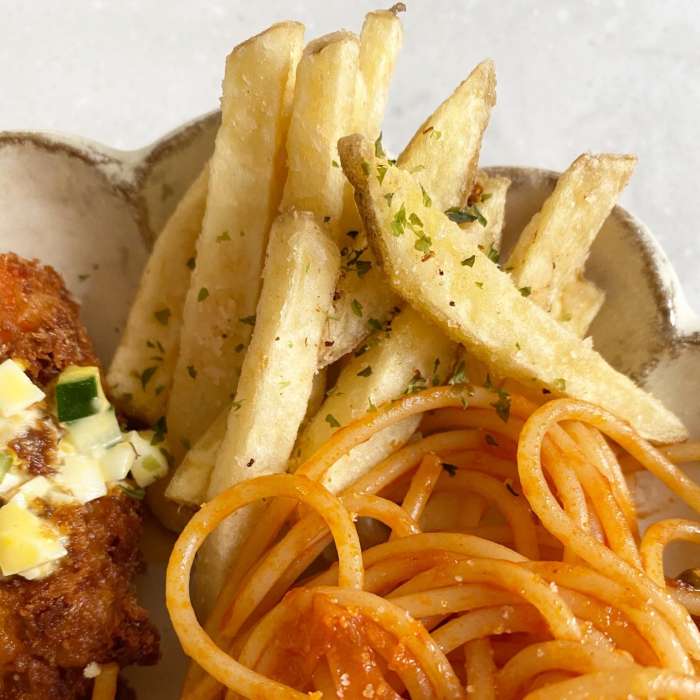 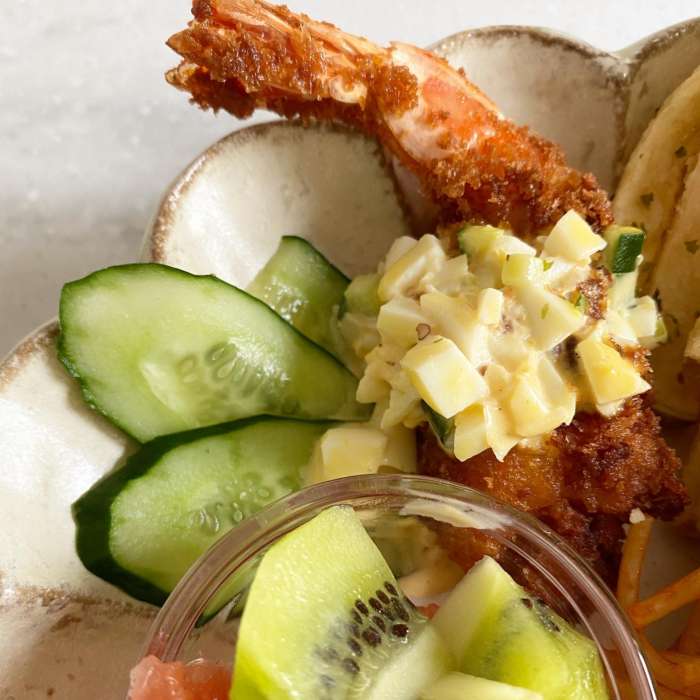 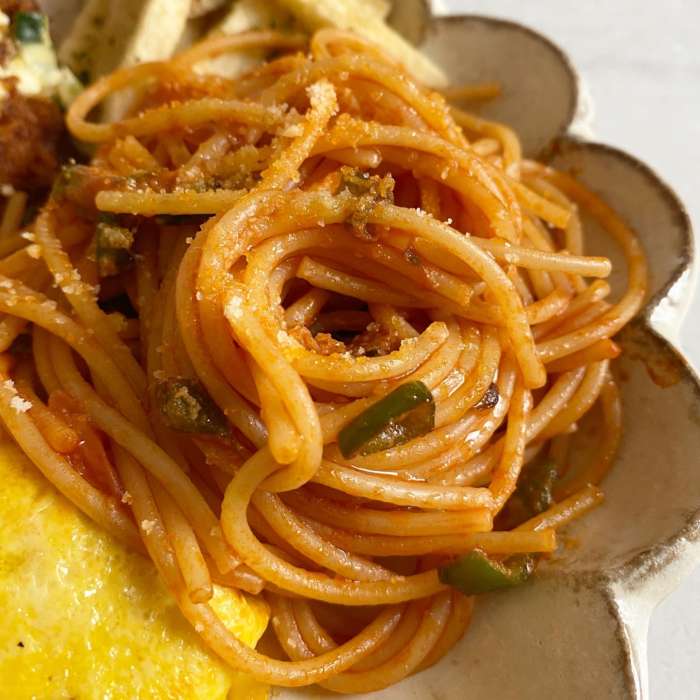 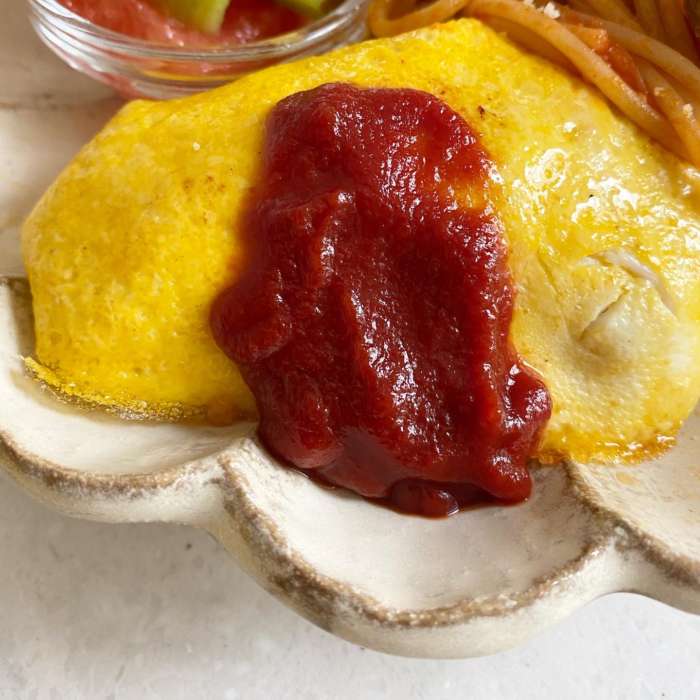 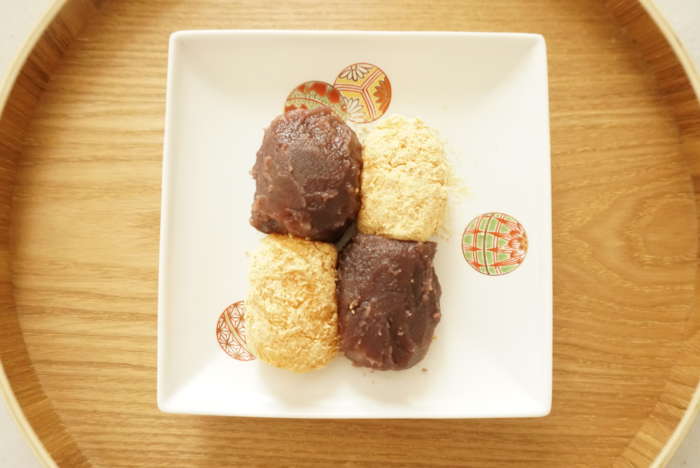 Botamochi/Ogahi is a popular Japanese sweets that is made of steamed glutinous rice wrapped with red bean paste.
Yellow one is dried soy bean powder called KINAKO. We don’t use dairy products and egg, so this is Japanese vegan sweets as well.

Traditionally, we eat this sweets twice a year in Japan. When we eat in Spring, this is called Botamochi. It is said that its name comes from the peony (Botan in Japanese) since the shape of red beans were used as a peony flower. We cover the rice with smooth red bean paste and the shape is oval.

In Autumn, this is called Ohagi. It is said that its name comes from the bush clover (Hagi in Japanese) since the shape of red beans were similar to bush clover. So, we use coarse bean paste and the shape is circle/round.

My family love this sweets snd it’s easy snack, so I make all year round! 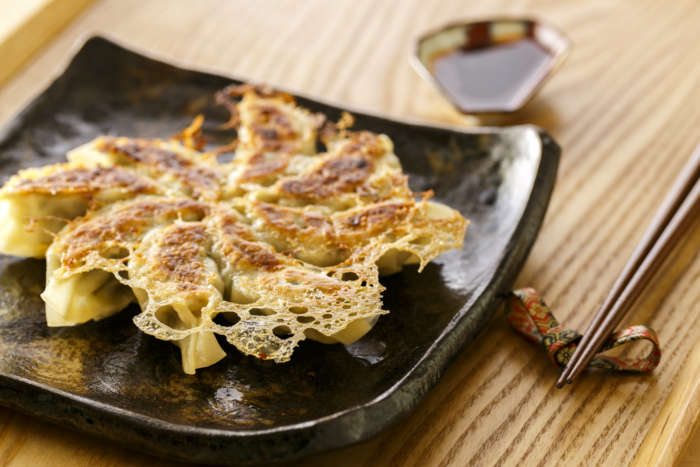 Gyoza (餃子, gyōza) are dumplings filled with ground meat and vegetables and wrapped in a thin dough. Gyoza are also known as pot stickers in English. Gyoza originated in China (where they are called jiaozi), but have become a very popular dish in Japan since most of Ramen shops also offer Gyoza on the menu. We usually use ground pork, nira chives, green onion, cabbage, ginger, garlic and sesame oil, but some gyoza specialty shops have also come up with a range of other fillings. Gyoza are found nationwide at ramen shops, Chinese restaurants, Izakaya restaurants and a small number of gyoza specialty shops.
There are mainly three types of Gyoza; Yaki gyoza(pan fried gyoza), Sui gyoza(boiled gyoza) and Age gyoza(deep fried gyoza). Yaki gyoza are most common in Japan. They are pan fried before a mixture of water and potato starch or cornstarch is poured in and everything is covered for a few minutes. Gyoza are usually eaten with a dipping sauce made of equal amounts of  soy sauce and rice vinegar. If you like spicy, some drops of chili oil is also commonly added. Gyoza are particularly popular in the cities of Utsunomiya in Tochigi prefecture and Hamamatsu in Shizuoka prefecture. 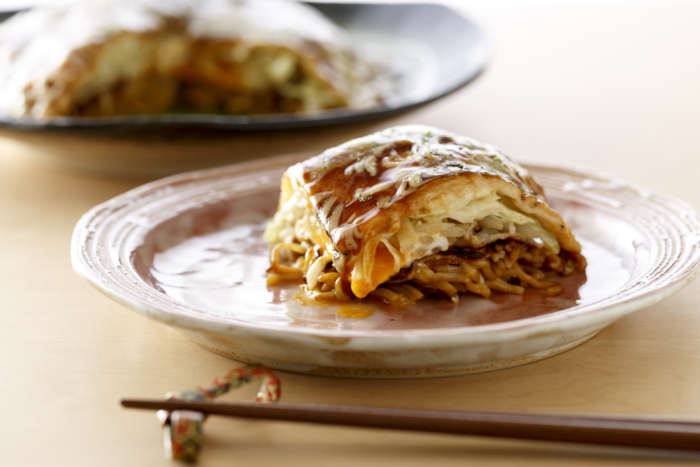 Okonomiyaki is a Japanese-style savory pancake cooked on a large hotplate. Okonomi means “As-you-like-it” and recipes differ depending on the region; traditionally Osaka and Hiroshima. Osaka-style Okonomiyaki is literally a pancake which contains flour, dashi, shredded cabbage, Japanese spring onion, meat/seafood and egg etc. Hiroshima-style Okonomiyaki has layers of those ingredients, plus egg noodles. It is flavored with a special Okonomiyaki sauce, Japanese mayonnaise and Aonori seaweed flakes. To make both Okonomiyaki, special spatula called “Okoshi-gane” is a must tool to flip the whole pancake. 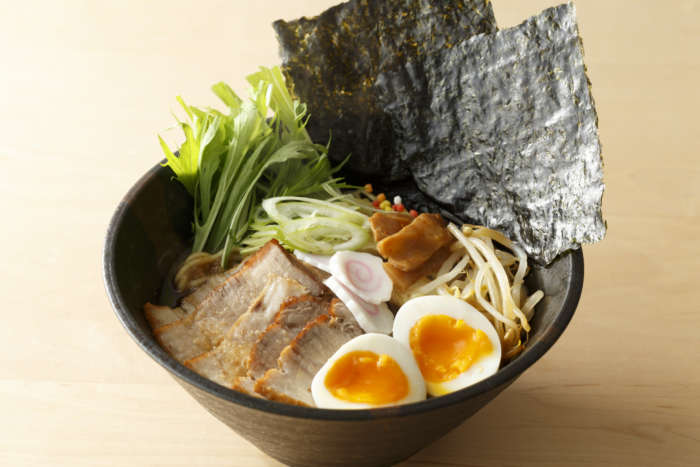 Despite the origin from China, ramen is now a most representative dish of Japan. There are three components of ramen. Soup is made with dashi and seasonings like soy and miso. Chefs develop their own recipes for their soup by combining multiple ingredients, such as pork bones, chicken bones, kombu (kelp), dried fish, vegetables and herbs. Two other components are toppings and noodles. These vary depending on the ramen shop and the region it is produced. Noodles are usually egg noodles and can be thicker or thinner. You can see the dynamic performance of shaking noodles with using noodle strainer at the shop. Ramen toppings reflect the local food culture. Seasoned eggs called Ajitsuke tamago is a must! The classic flavors are miso, salt, soy sauce and tonkotsu (pork bone-based thick soup). Ramen is regionally diverse. Tonkotsu is popular in the south, whereas Shoyu ramen (soy sauce-based ramen) is popular in Tokyo. 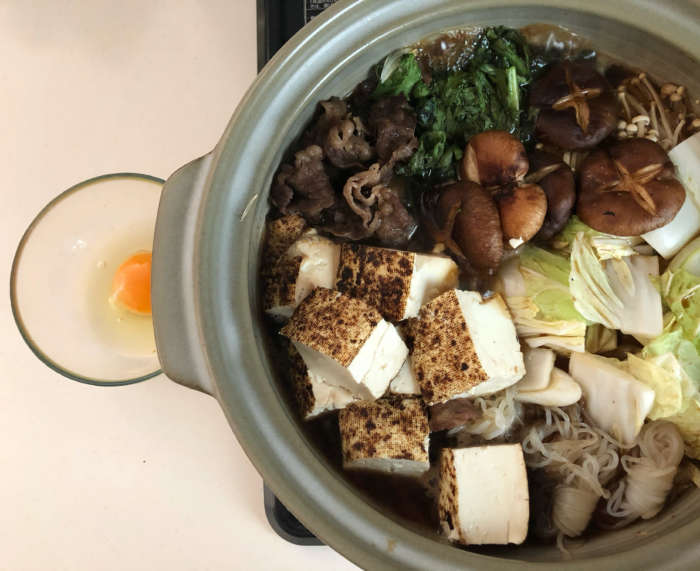 Sukiyaki is a Japanese style hot pot and has thinly sliced beef, cooked with various vegetables in a table-pot cast-iron pan. The Japanese began eating beef only after 1860s when the western culture flooded into the country. Sukiyaki is now a popular dish same as Sushi, Ramen and Tempura etc. You can eat Sukiyaki at restaurant but we normally cook Sukiyaki at home. Sukiyaki has Japanese beef, Chinese cabbage, chrysanthemum, Japanese green onion, Shiitake mushroom, Grilled tofu and Shirataki (potato noodles). I recommend to use Japanese beef called Wagyu which has good balance of red meat and fat. In Kanto region (Tokyo and nearby area), people make warishita, which is a mixture of soy sauce, sugar, sake and mirin, and add it to the pot little by little. In Kansai region (Osaka and nearby area), there seasonings are directly added to the pot. Once cooked, the ingredients are dipped into a bowl of a raw beaten egg. The hot food cooks the egg and the egg enriches the flavor of the dish. 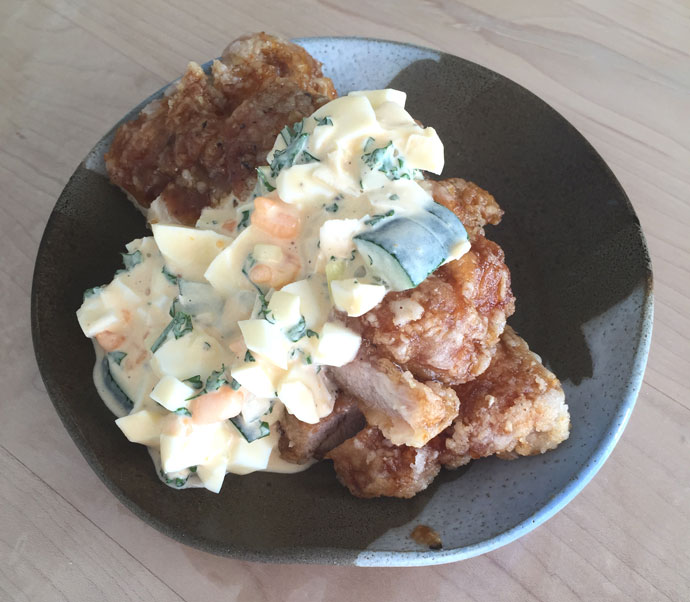 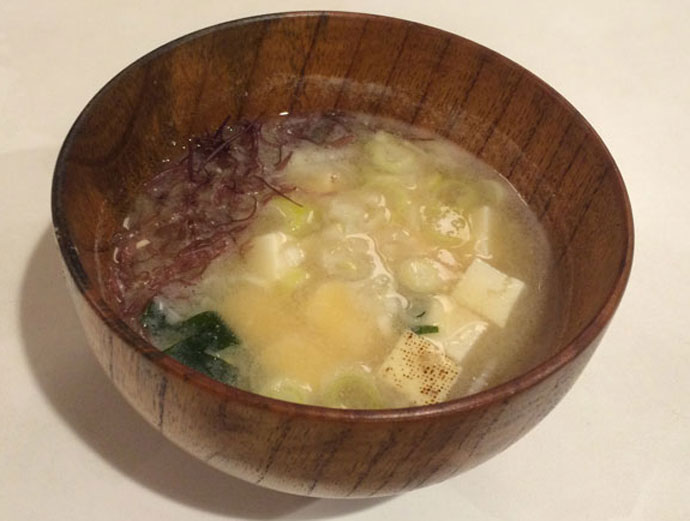